The Surreal Antics of Salvador Dalí

The Surreal Antics of Salvador Dalí 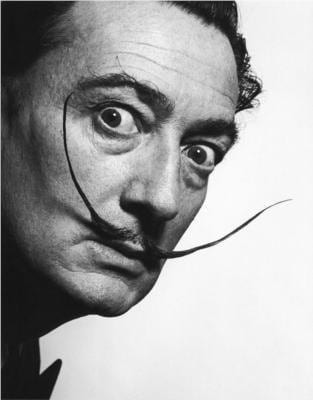 This week marks the birthday of renowned surrealist painter Salvador Dalí. For Dalí, Surrealism wasn’t just a cultural movement but a way of life. The creator of unconventional art led quite the unconventional life chock full of weird, disturbing and downright bizarre anecdotes.

Dalí was convinced he was the reincarnation of his older brother who had died at three years old, nine months before Dalí was born. This belief stemmed from an incident when, at five years old, his parents took him to his brother’s grave and convinced him that this was the case. Dalí later reflected that they, “resembled each other like two drops of water, but we had different reflections,” and that his brother, “was probably a first version of myself but conceived too much in the absolute”. This obsession with his brother would manifest itself in later Dalí paintings such as Portrait of My Dead Brother. Another disturbing story from Dalí’s childhood recounts a time when he pushed a friend off a 15 foot bridge and apparently sat calmly eating cherries while the boy’s mother tended to his wounds.

Long before Lady Gaga’s famous meat dress, there was Dalí’s painting suit. On a visit to New York in 1934, Dalí stepped off the boat wearing a suit with some of his paintings attached to it using a piece of string, greeting the awaiting press by waving a French baguette. During the same trip while attending a ball held in his honour Dalí wore a glass case containing a bra across his chest. This wasn’t Dalí’s only foray into the fashion world. In 1935 he produced a gouache in honour of the fashion designer Mae West, titled Face of Mae West which can be used as a surrealistic apartment. While giving a lecture at the 1936 London International Surrealist Exhibition dressed in an antique diving suit which was supposed to represent him, “diving into the sea of his subconscious. Things took a strange turn when Dalí began to flail about on stage, thinking it was part of the lecture, the gathered audience took some time to realise that the artist was suffocating in the soundproof suit and set about rescuing him.

Like many artists during the 1930s, Dalí seemed to have flirted with Facism. He is well known for having a friendly relationship with Spain’s fascist dictator Francisco Franco, often visiting the general and donating numerous pieces of his work. In 1934 angered with Dalí’s public disdain for the communism many of them advocated, (seen in The Enigma of William Tell, a piece in which he poked fun at Lenin ) other famous surrealist artists including André Breton put Dalí on a mock trial for participating in “the glorification of Hitlerian fascism.” The resulting “trial” resulted in Dalí’s expulsion from the surrealist movement.  Unperturbed, however, Dalí went on to paint The Enigma of Hitler in 1938. It is difficult to decide whether Dalí’s obsession with Hitler was part of an outrageous persona he had cultivated over the years, or in fact a genuine fascination. Dalí is on record as saying,  “I often dreamed of Hitler as a woman. His flesh, which I had imagined whiter than white, ravished me… There was no reason for me to stop telling one and all that to me Hitler embodied the perfect image of the great masochist who would unleash a world war solely for the pleasure of losing and burying himself beneath the rubble of an empire; the gratuitous action par excellence that should indeed have warranted the admiration of the Surrealists.”

Eschewing the stereotype of the struggling artist, Dalí was well known for doing almost anything for a quick buck. So much so that the surrealist poet André Breton nicknamed him “Avida Dollars”–an anagram of Dalí’s name that translates to “eager for cash.” Perhaps his most successful venture was designing the logo for the lollipop brand, Chupa Chups. In 1969 while having coffee with Dalí, the founder of the lollipop company Enric Bernat complained of his difficulty in finding a suitable logo. There and then Dalí went to work doodling some rough sketches on a nearby newspaper incorporating the brand name into the now iconic daisy design, for which he was well remunerated.          Dalí was also not above endorsing products, as this advertisement he did for the Lanvin chocolate brand shows. Other brands he advertised for included  Alka Selzer, Braniff airways, and the Spanish brandy Veterano. In his early career Dalí, a well-known spendthrift, took to paying his secretaries with commissions on his artwork in lieu of monetary payment. While worth little at the time, the pieces appreciated to be worth, in some cases, over one million dollars, rendering some of his secretaries millionaires once they cashed in. It is ironic that despite his obsession with money, Dalí came close to bankruptcy in 1974 after a string of bad deals conducted by dubious business managers. Luckily, after a round of fundraising on the part of his friends in the art world, he got back on his feet.

Dalí was famous for his paintings of elephants and tigers, he was even pictured taking an anteater for a walk in Paris in 1969 and appeared on an American talk show walking another such anteater on a lead. It was, however, his pet ocelot (a type of feral cat found mainly in central America), named Babou, that garnered Dalí’s affection. He would keep his ocelot, supposedly gifted by the Colombian head of state in the 1960s, on a stone studded collar. In a particularly humorous incident Dalí took the cat into an upmarket Manhattan restaurant causing great distress to one female diner - in an attempt to calm her down Dalí told her that it was merely a house cat and explained away its unique coat by claiming he had painted it on himself.