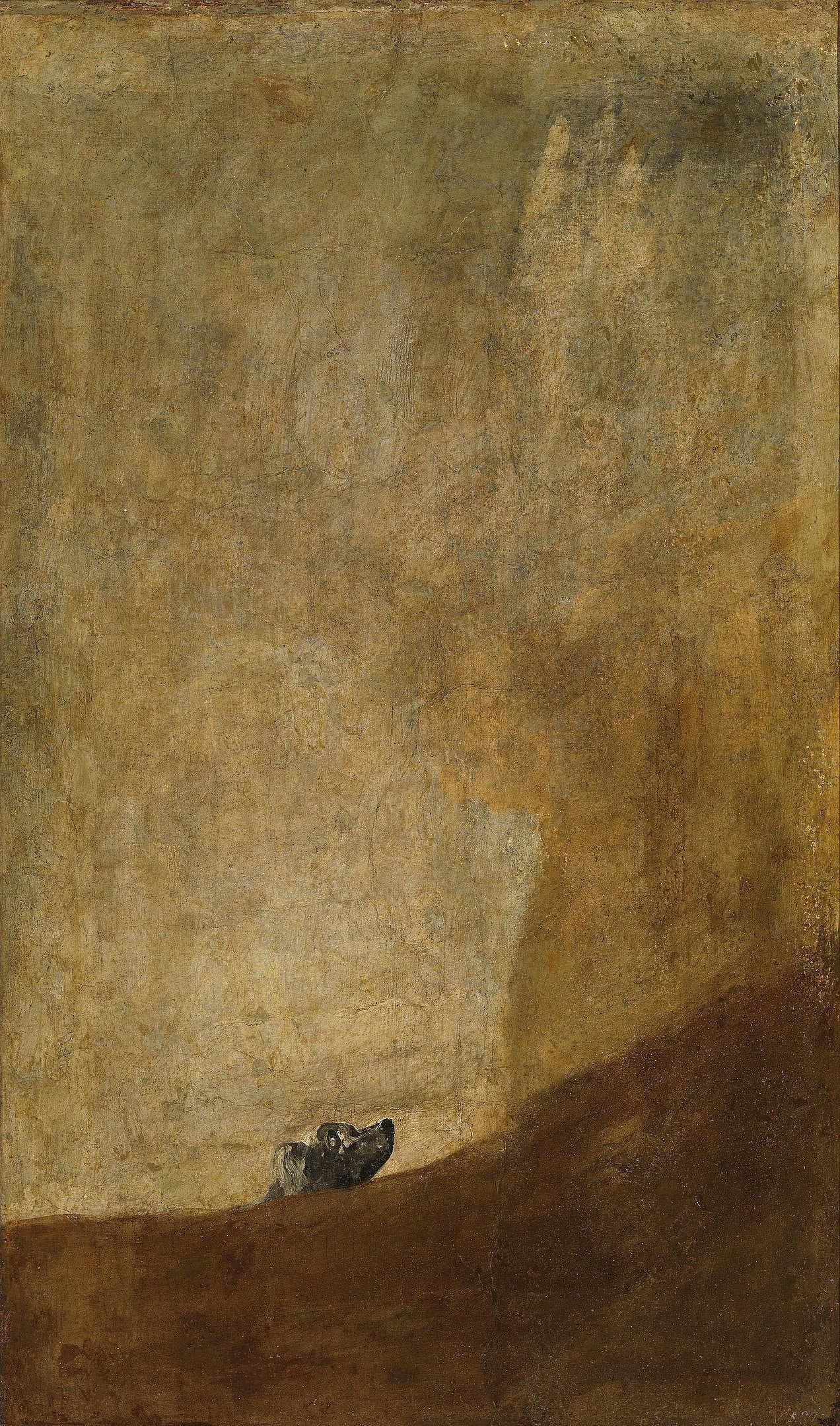 It sounds like something out of a Hitchcock film. The old physically frail painter, once renowned throughout Europe, now locked away in his country residence, cut off from the world and disillusioned with its ways. So disillusioned that he begins painting on the walls of his farmhouse scenes which he doesn’t intend the world to see. Works that are so intense and haunting that even today, 200 years later, in the age of CGI horror films, some visitors to the Prado museum in Madrid can hardly even look at them.

All of this is a far cry from Goya’s early life. Francisco Goya was born in the town of Fuendetodos in Aragón, about thirty miles outside of Zaragoza. After showing promise as an artist in his early years, Goya travelled to Rome to finesse his skills. When he returned, he quickly rose to the level of painter for the Spanish royal court, painting portraits for the aristocracy, creating tapestries (The Parasol, 1777 and The Pottery Vendor, 1779) to decorate their palaces and satirising the social and political problems of the day through his cartoons.

Goya’s professional career reached its zenith in 1800 when he was commissioned to paint an official portrait of the Spanish royal family. Ironically, this came just one year after he had finished a series of 80 etchings known as, “Los Caprichos” which took aim at the ruling classes of Spain and depicted scenes of corruption, bribery and superstition that he felt were rampant in Spain. The most famous of these etchings The Sleep of Reason Produces Monsters has been seen as Goya’s declaration of the superiority of enlightenment values and the dangers that arise should reason be abandoned.

In 1808, despite Napoleon’s invasion of Spain, Goya still remained a painter to the royal court of his brother Joseph Bonaparte and still continued his criticisms of official power through his etchings, depicting the horror of the war raging across Spain. When the Spanish Monarchy was reinstated upon the defeat of Napoleon in 1814, Goya again miraculously managed to keep his job, with the new King Ferdinand reportedly telling him, “You deserve to be garroted, but you are a great artist so we forgive you.” For a few years Goya continued his royal duties, but by 1819 he had become completely disaffected with the repression being instituted by the Spanish monarchy and the excesses of the inquisition. He withdrew from public life and lived in virtual isolation with his mistress in a farmhouse outside Madrid.

It was here, deaf, disenchanted and after years of suffering from ill health, that Goya covered the walls of his farmhouse in what would become known as his ‘Black Paintings’. These fourteen nightmarish pieces portray scenes like the Roman god Saturn gnawing on the limp body of his child (Saturn Devouring His Son), and a goat devil preaching to a wailing crowd (Witches‘ Sabbath). Two Old Men Eating Soup is a surprisingly disturbing scene of two decrepit old men, one dead, the other almost dead and skeleton-like, leaning over a bowl of soup and still eating, trying to consume all they can.

Various meanings have been attributed to these works. Some art historians argue that they are the product of a deranged mind suffering from a reoccurrence of the mysterious illness that had twice almost killed him. Pointing for instance to the Saturn painting as displaying Goya’s long-held anxiety that his illness would recur and eventually devour him. Some even interpret Two old men eating soup as representing his fear of old age.

Others argue that these works are a continuation of his satirical streak. That is to say that the ghoulish creatures of the Black Paintings are the aforementioned monsters that Goya warned of in The Sleep of Reason Produces Monsters. For example, the Witches’ Sabbath mural has been read as a criticism of the actions of the Spanish inquisition and their opposition to enlightenment thought. According to the American art historian Albert Boime, “These inversions may be metaphors for the irrational undermining of the liberals who argued for scientific, religious and social progress. Many of the scientific bodies then active were condemned as subversive and their members accused as ‘agents of the devil’.”

Whatever Goya’s motivations for these works, it is almost certain that he never intended for them to be seen while he was alive. After five years spent at his farmhouse, he went into a self-imposed exile in Bordeaux, France, spending the last four years of his life there. The farmhouse was left to Goya’s grandson Mariano, but it wasn’t until 1874 that an effort was made to transfer the murals from the wallpaper they had been painted onto, to canvas frames, in order to preserve them. Just a few years later the pieces were donated to the Prado museum in Madrid where they hang to this day.