7 Things To Know About Picasso

7 Things To Know About Picasso 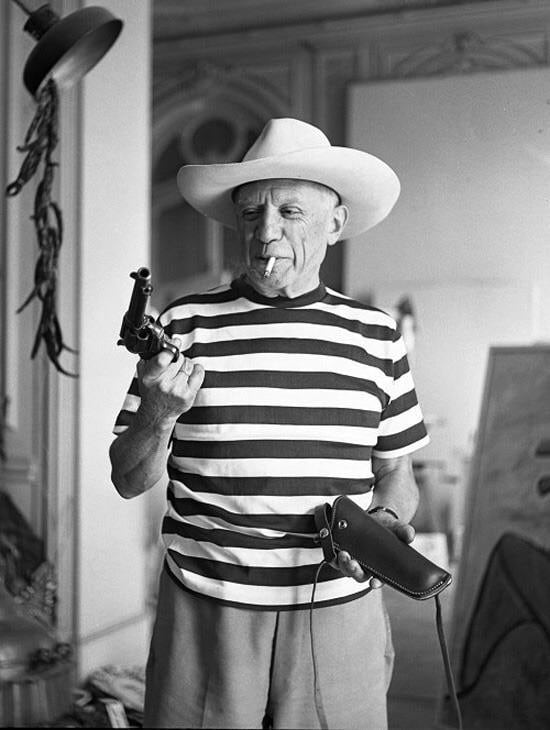 Rarely has an artist so successfully permeated the popular culture to the extent that Pablo Picasso has. In much the same way as people who have no knowledge of Classical music have still heard of Mozart, or people who have no interest in soccer know the name, Maradona; the name Picasso has become synonymous with art and mastery of art. Here are 7 funny, informative, and shocking facts about the great artist.

Pablo Picasso, or Pablo Diego José Francisco de Paula Juan Nepomuceno María de los Remedios Cipriano de la Santísima Trinidad Martyr Patricio Clito Ruíz y Picasso, to give him his full name, was born in Malaga, in 1881. His 23-word name was chosen by his mother and comprises the names of various saints and relatives. According to his mother, his artistic inclinations were apparent from early on, his first word was not mama or dada but piz," short for lápiz (pencil). His first piece, Le picador, was painted at age 9 and depicted a bullfight. An apocryphal story tells of how Picasso’s father, a teacher at the Barcelona School of Fine Arts, caught Picasso finishing off one of his own sketches. The story goes that he was so impressed with his 13-year-old son’s work, that he gave up on his own painting career knowing he could never reach that level.

Beginning in 1901, Picasso entered his “Blue Period” following the suicide of his close friend Carlos Casagemas. During this time Picasso’s paintings became dominated by the colour blue, while figures were painted with long sombre looking elongated faces. Two of what are often considered Picasso’s finest pieces The Old Guitarist and Femme aux Bras Croisés (Woman with Folded Arms), were painted during this period. By 1904 he seemed to have gotten over his depression and had fallen in love with a French model, Fernande Olivier. His paintings during this period such as Acrobat and Young Harlequin and Les Baladins (Mother and Child, Acrobats), were dominated by warm colours and happy scenes. This stage of his career became known as his “Rose Period.”

3. Picasso was once suspected of stealing the Mona Lisa

When the Mona Lisa was stolen from the Louvre in August 1911 Picasso and his friend, Guillaume Apollinaire, were two early suspects. A Belgian man, Honore-Joseph Géry Pieret, told the Paris-Journal newspaper that he had previously stolen artefacts from the Louvre and sold them to friends, and furthermore, that he suspected them of stealing the Mona Lisa. One of these friends, (not mentioned by name in the article), was Pablo Picasso. Picasso had purchased two stolen 2000-year-old Iberian statues from Pieret for 50 francs each. Naturally, this article greatly interested the French police and the search began for the unnamed statue buyer. Fearing the net was closing in, Picasso and Apollinaire walked to the river Seine late one night intending to throw in the statues. However, when it came down to it neither man could bring himself to do it. The next day Apollinaire dropped off both statues at the offices of Paris-Journal under the condition of anonymity. Within days the police had caught on and hauled Apollinaire and Picasso in for questioning. A month later both men found themselves before a French magistrate protesting their innocence. Although both had traded in stolen artefacts on a small scale, the presiding judge soon deduced that neither man knew anything about the theft of the Mona Lisa and threw the case out. The whole story certainly adds a new dimension to the often cited Picasso quote, “Good artists copy, great artists steal.”

4. Picasso has had more pieces stolen than any other artist

Considering one of his paintings, Les Femmes d’ Alger (“Version O”), sold for $197.4 Million in 2015, it’s no surprise that Picasso’s paintings are often at the top of every art thief’s list. Today it’s estimated that Picasso has over 1000 pieces currently either stolen or missing, with this number reaching a height of 1,147 in 2012. Just over two years ago, Picasso’s Buste de Femme valued at $28 million was recovered by a Dutch art detective having being stolen from a Saudi Yacht while it was docked in the French Riviera in 1999. Given the shady art dealings of Picasso’s early life, it’s hard to not to see the irony.

5. Picasso’s backchat to the Gestapo

Picasso’s 1937 masterpiece, Guernica, exposed to the world the horrors of the Nazi Condor legion’s bombing of the Basque country during the Spanish civil war. The painting, which is notoriously difficult to describe, is probably best summed up in this Guardian editorial, “In black and white, the piece has the urgency of a newspaper photo. Flailing bulls and horses show that the visceral horrors of war are not just an affront to human civilisation, but to life.” It was no shock then, that when the Germans occupied Paris in 1940 a Gestapo officer came knocking on Picasso’s door pointing to a photo of the Guernica mural and asking, “Did you do that?” To which Picasso reportedly replied, “No, you did.” Perhaps unsurprisingly, for the duration of their occupation, the Nazis banned the display of Picasso’s paintings for “not following the guiding rules of art.”

6. Pioneered the medium of Collage

A staple of every primary school art class for decades, it’s perhaps surprising to find out that the humble collage was once a revolutionary artistic concept. Along with the cubist artist Georges Braque, Picasso pioneered the use of collage, creating pieces out of common materials like newspapers, wallpaper and various other paper scraps. However, it was Picasso alone who first incorporated the ideas behind collage into his paintings beginning first with Still Life with Chair Caning. Picasso pasted a patch of oilcloth onto a chair-cane design painted on canvas accompanied by a mish-mash of objects such as a knife, a knife handle, the rind and segments of a piece of fruit, a napkin, and a wine glass.

7. He would fire a revolver loaded with blanks at people who bored him

Possibly influenced by stories he heard about French writer Alfred Jarry, who was known to do the same thing, Picasso would carry a revolver loaded with blanks and fire at anyone who dared ask him what his paintings were about or what was his aesthetic theory.

Previous Post Japonisme: How Japan Changed The Course Of European Art
Next Post The Dark Story Behind Goya’s Black Paintings
0 items in your cart